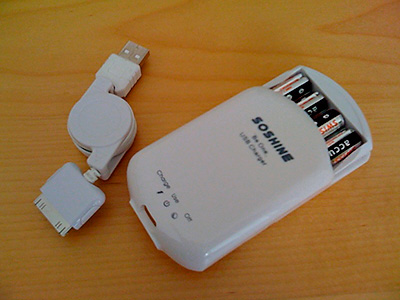 The iPhone has become a very important tool for my business in the last few months that I use it. With every firmware it’s getting better and it’s running quite smooth and stable now. Still discussed are the lack of some features (like copy-paste, MMS etc.) and the performance of the built in rechargeable battery. I’m OK with the limitations that the new iPhone 3G still has. For me the advantages are way bigger than the limitations.

Even if it is said that the battery performance of the iPhone is comparable or even better than of other smartphones, it is better to be prepared. If you charge your iPhone every night, the battery should last long enough for normal use. But in heavy use or on a very long day (shooting a wedding, anybody?) it might run out of battery.

Some time ago I bought an USB charger from Philips with a built-in rechargeable battery. So if there’s no power outlet around out in the field, you still can charge your iPhone. Great idea! It’s called: ‘Philips Power4Life SCM7880 USB Charger/Back up battery‘ and just received one of the ‘iF product design awards 2008’. It works very well. Fully charged it stores enough energy to charge the iPhone up to about 75%. Enough to survive.

2 thoughts on “Gimme Some Juice – iPhone Power On The Road”